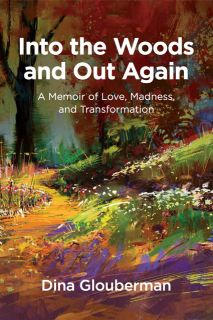 A review by Graham Mummery of
INTO THE WOODS AND OUT AGAIN: A MEMOIR OF LOVE, MADNESS AND TRANSFORMATION

This review appeared in the
JOURNAL OF THE SCIENTIFIC AND MEDICAL NETWORK, No 129 | 2019/1

Dina Glouberman is one of the remaining figures in Humanistic Psychology who can trace her lineage back to Abraham Maslow. She trained under him at Brandis University. However, she is probably best known as a facilitator of workshops and as a co-founder of Skyros Holidays.The purpose of Skyros Holidays is to provide people with the space to reflect on their lives and live more fully as themselves. As she states at one point in the book:
“Understanding and becoming my truest self – and helping others to do the same – happens to be the love of my life.”

Many of us who have experienced her training sessions, both on and off Skyros, will attest that the experience has been life-transforming. For her the moment of insight that really set this in motion was a psychosis.

Glouberman begins this very readable memoir here. She starts, as she often does at points through the book, contrasting what she knows now with what she knew at the earlier time. A reoccurring image she invokes is the humorous one of her being a cactus learning to live and then thrive in a desert, learning to live by her own truth. Those who know her work will recognise this as a technique she employs in ImageWork, the creative imagination technique she devised and facilitates often to healing effect though sometimes it also involves acknowledging pain.

In her description of psychosis, she does not ignore the pain at the time. She was a recently qualified therapist working towards a higher qualification in a different country. She was concluding with a therapist and studying with RD Laing at the Philadelphia Association as well as working for a PhD. She mentions having experienced problems back in the USA having had a visit from the FBI looking for friend of hers who was involved in “radical” politics. The walls in the hospital seemed to have voices, something she later found was due to someone playing a radio on the other side. It was a time of extreme isolation. Laing and his colleagues were little help, though one would have thought one of their midst going though madness would be of interest. In the end Glouberman states what got her through this period was support from her husband to be, Yannis, and other patients in the hospital who she states were “real healers.”

Yet Glouberman is also aware that this was also creative. Though Laing and his associates were little help at the time, she has not lost a sense that there is breakthrough in madness as well as breakdown – an idea that still struggling to get into the mainstream thinking. Some of this is shown in the use of the word “madness.” Glouberman points out it is more vivid that the psychiatric term “psychotic” adding that the fact she has been mad helps her to assist people going through their own processes.

This also demonstrates something that is a feature of Glouberman’s work. Her genius in this area is an ability to help people to make their images and dreams become concrete. She has written several books about how to do this. The story here is how this work came about. Though literate with psychological theories, she is aware that an experience must be real to a person before they can work with it. This is the reason for her preference for the word “madness” over “psychosis.” As she points out, the latter word only really has meaning in the world of mental illness. What Glouberman learned from her experience is the need to listen to inner images and the importance of community in bringing what they say into the world through community. These are the basis of both ImageWork and Skyros.

It is the realisation of these that are the focus of the rest of the book. The writing in this part is perhaps less intense, but equally there is more lightness. This is never more so in relating how Skyros grew out of almost nothing. She and Yannis arrived on the Greek island of that name, purchased a place there, then invited people for courses. Of course, it wasn’t that simple, though there was something of this “spontaneity” in these early days. She records times when people turned up and Yannis had to find accommodation. This evolved into a need to create an administration office in the UK, which Glouberman admits getting there felt at odds with humanistic psychology’s attitude of “let it be” and wanting to keep a focus on the spiritual. This is chronicled together with the creation of their second centre on the island at Atsitsa, and eventually adding writing courses to the activities with some well-known writers including Sue Townsend and Hugo Williams. Skyros celebrates its fortieth year in 2019.

Glouberman mentions at one point that Yannis once told her that if he worried about real things, she worried about the imaginary. This last part is perhaps what led her to develop ImageWork, a technique that draws on, amongst other things, Jungian and Gestalt psychology. Her aim here was to allow access to areas of the mind she had discovered while in her psychosis, but to allow them to manifest in a safer context. This has fed into her spiritual life, and she still runs ImageWork workshops worldwide training people to access their own inner lives. Yet she notes over the years her emphasis changed from being focussed on inner life to caring also about the outer world.

At the end of the book she contemplates the image of the cactus which is surviving and thriving in the desert. It is achieving an alchemical link of inner and outer worlds which is her work. It is about balancing both inner and outer to live life as a whole. A lively and fascinating book.

Graham Mummery is a published poet and transpersonal psychotherapist working in private practice.